The beer spectrum has expanded with a variety of craft beers and offers an incredible array of flavors. A great craft beer can enhance a delicious meal, and it can also be used in cooking.  The world of beer offers many possibilities for perfectly matched food pairings, whether as a beverage or an ingredient.

From IPA and pale ale to craft pils or strong stout beer: the variety of artisanal brewed craft beers is immense. Pale ale and India pale ale (IPA) brewed from light malt are now frequently found on a drinks menu. Pale ales are characterized by a very hoppy fruity taste. India Pale Ale is hopped at least twice, so it tastes slightly more bitter and has a higher alcohol content.

Craft beers can be excellent additions to savory and sweet dishes, such as malty brownies with pecan nuts and a dash of stout beer, or creamy risotto with sparkling IPA.  Our recipe for Black Pork Marinated Pork Chop with Cinnamon Pears – flavored with thyme, oregano and Black IPA – is another delicious example.

Craft beer is similar to wine in that it opens up completely new culinary worlds, whether as a beverage or an ingredient.  Enjoy!

For the pork chop:

4. Mix all together with beer with salt, sugar and pepper in a bowl and marinate overnight

5. Remove from marinade and grill for 4-5 minutes each side

2. Melt butter in a non-stick pan and add cinnamon 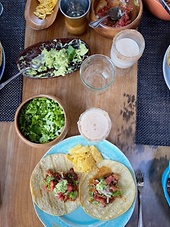 A Feast for Your Senses
For your own at-home Cinco de Mayo celebration, our Pork Carnitas recipe is truly a feast for your senses. Pair this taco with a creamy, delicious side dish of Frijoles Charros and the traditional sweet drink, horchata.
… 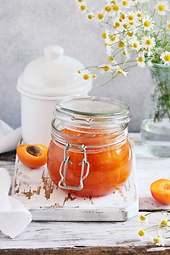 Homemade Jam is so Easy to Make
A deliciously fruity jam adds a special touch to toast or scones. And when it is homemade, it tastes even better! But how do you prepare this sweet fruit spread at home? We will show you how to easily turn fresh fruit in
…

A Flavorful Cinco de Mayo Celebration
In Mexico, Cinco de Mayo celebrations are primarily celebrated in the state of Puebla, where in 1862, the Mexican army was victorious over the French Empire in the Battle of Puebla. It served more as a symbolic victory f
…

Fast and easy: chicken broth
Homemade chicken broth is a warming and invigorating beginning for a hearty chicken soup. Plus, it’s scientifically proven that chicken broth has an anti-inflammatory effect to help relieve cold symptoms. That's one reas
…

Fast and Easy: 5-Minute Paella
Spanish cuisine is as colorful as their culture. Cooking and eating together are important parts of the Spanish way of life, and those who’ve visited this beautiful country know that their famous paella is a must! Our pr
…