Whether it’s meat slowly cooked in the smoker, or vegetables cooked on a grill, your summer dishes can be enhanced by the variety and culinary creativity of barbecue sauces. Enjoy traditional spicy BBQ sauces, or try fruit chutneys, which make a wonderful contrast to the smoky grilled food.

We have put together a few sauce recipes for you that will make your barbecue special.

Ketchup - the base of so many delicious BBQ sauces

There are so many regional varieties of barbecue sauces, but perhaps the most well-known is the one that starts with the simplest of bases, ketchup. From there, the sauce can take many flavor turns, based on which spices are used. Forget the jar –  homemade barbecue sauces allow you to put your own personal touch on any barbecue.

1. Boil tomatoes in boiling water, skin and cut in half, cut out stalks and dice pulp.

3. Simmer tomatoes, apples and onions over medium heat for 30-40 minutes until onions are tender.

4. Blend with the blender and stir in vinegar, ginger, allspice, cinnamon, honey, salt and pepper.  Place in a pot and simmer, uncovered, until the sauce is thick.

Barbecue sauce is an American original. Often the sauce is the star of the meal – a recipe that is often a well-kept secret of the host.

3. Place all ingredients in a pot, season to taste and simmer over low heat for 10 minutes  stirring occasionally. After simmering, remove lemon slices and add a little whiskey to taste.

4. Before serving, cool sauce and leave it covered for several hours.

Chutneys are a fruity alternative to classic BBQ sauces. Especially in summer, it is fun to process freshly picked fruits – and to give the barbecue a refreshing touch.

2. Heat water and sugar in a saucepan and allow to caramelize. Then add onions and simmer. Then add vinegar and simmer briefly.

3. Add apricot pieces and chili, bring to a boil and cook for 30 minutes in an saucepan, uncovered, over medium heat.

4. Season with salt and pepper and put in clean canning jars. 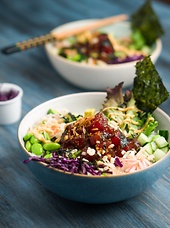 Homemade Poke Bowls
Poke Bowls bring a piece of Hawaii right to your own kitchen. This light and refreshing dish is a hot culinary trend, and it’s easy to make! What is Poke?Poke is a Hawaiian fish salad that consists of raw, marinated fish
… 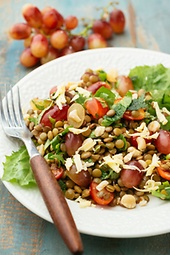 Easy Summer Recipe: Lentil Salad
During the summer, we want to relax and spend less time in the kitchen.  This fresh lentil salad recipe is light and refreshing—and it cooks up faster in a pressure cooker, delivering a delicious and healthy lunch or din
…

All About Apples
Apples enrich the kitchen all year round. We’re showing the whole culinary spectrum of the apple from sweet to savory and reveal which healthy secrets are hidden under the skin. We’re also sharing our sweet and savory re
…

Food hacks for the fridge
It’s the buzzing center of every kitchen: the fridge. Although it’s been around for decades, there are still many fridge mysteries. What belongs in each compartment? How can I save energy?  How do I make perishable food
…

Beyond wine: Beverage selections for your meal
The perfect menu includes the right drinks. Wine comes to mind, but there are many other beverages that can pair harmoniously with your dishes, including non-alcoholic beverages, which are increasingly becoming a focus o
…